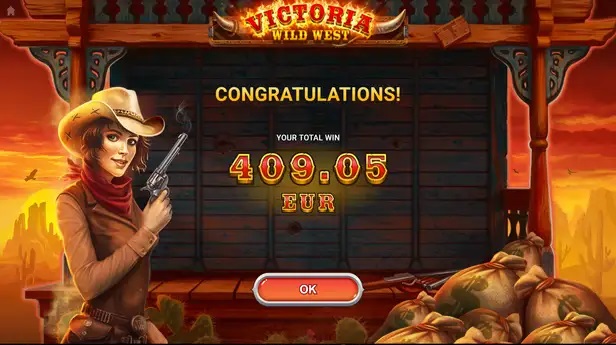 This is the third slot machine from TrueLab, which they chose to call Victoria Wild West. The first two had a similar concept and main character. As you can see inside, the concept in this instance is Wild West-inspired, and it looks stunning. It should catch your attention for more reasons than simply how it appears because it has a few extra tricks up its sleeve.

You can bet on 10 win lines on Victoria Wild West’s 5×3 reels. Its 4,000x jackpot and 96.31% maximum RTP make it, like many others, a slightly dangerous choice. Additionally, there are elements like wilds, three different kinds of scatters, levels of free spins, and a Bounty Hunter gathering mechanism.

The wide betting range allows everyone to play the slot and is very generous. Each spin will run you anywhere from $0.10 to $100.

Victoria Wild West is a very volatile game that has a potential payout of up to 4,000 times the bet. The combination is not spectacular; better top jackpots for comparable risk levels have been observed in the past, but at least the RTP can be considered acceptable at the 96.31% figure thus far.

To begin with, there is a wild symbol that can be used in place of any other normal sign.

Second, you’ll discover that there are three scatter symbol variations, each of which will display either Victoria on the first reel, Bailey on the fifth reel, or Wanted Posters (reels 2-5).

Victoria must appear on the first reel for the Bounty Hunter mechanic to work, and the other four columns must all contain Wanted Posters. Victoria will collect the winnings from those Wanted Posters, which range from 1x to 50x the stake.

They named the free spins “Most Wanted.” 10 free spins are yours if Victoria and Bailey appear simultaneously on the reels. If you gather six Wanted Posters, you can advance in level. Five additional spins are added at each level up, and the multipliers for the posters are also increased (up to 5x possible). Later stages allow for Bailey to land and be captured, paying up up to 1,250 times the stake (multiplied by the Poster’s level).

You are viewing a slot machine featuring elements of the Wild West and two primary characters named Victoria (a bounty hunter) and Bailey (bandit). Additionally, there are Wild Badges and Wanted Posters. The paytable has four classy card suit symbols at the bottom and horseshoes, whips, horses, and firearms at the top.

Taking everything into account, I believe that Victoria Wild West will prove to be a popular demo slot. The features seem fantastic, and the graphics are excellent. The top jackpot is about the only thing I wish was better. Victoria Wild West slot may be a nice choice overall for a player seeking a retro-style aesthetic and low volatility, but there are many other possibilities of that kind that provide higher RTP percentages. Overall, I enjoy the slot machine; it is a genuine TrueLab slot. It has nice graphics, and has some interesting bonus features.