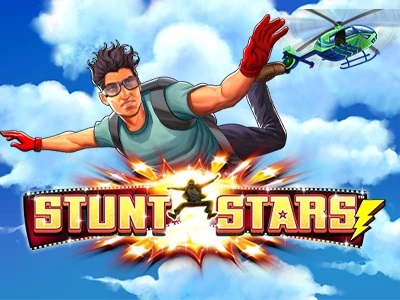 We occasionally come upon a slot machine with an unusual plot, and today Lightning Box and Stunt Stars fill that void. In contrast to the performers they typically assist, as the title suggests, the stuntmen and women are the real stars of the show. Although it also has a cinematic concept, the emphasis is on the stunts.

There are 243 chances to win on the 5×3 reels of Stunt Stars. When you obtain the game at 96% RTP, the top prize of 17,010x the wager seems like a great incentive to try it out. Given that the Sky Dive Bonus also offers free spins, the Stunt Feature and Sky Dive Bonus are crucial.

The minimum wager required to start the process is going to be worth $0.30 or more, with a maximum stake of $90 also being a possibility.

The top prize in Stunt Stars is really good, but don’t expect to win the 17,010x jackpot quickly. If you find a version with the RTP set to 96%, it at least appears to be a fair slot overall.

A symbol that is used in one of the features can only appear on reels 2, 3, and 4. It is the wild emblem, clearly identified as such, and features a picture of a car leaping over a ridge. This is a symbol that will only be used in place of the standard combinations.

A single Stunt Double Star scatter symbol may appear on each of the game’s five reels. To be eligible for a minor prize, it has to land on at least three reels. The intriguing part begins here. The first win is made up of the sum of the rewards from that round, and you receive it more than once, once for each scatter that initiated the round.

The Skydive scatter, which starts a bonus game and pays 2x to 20x the bet if it appears three to five times, is the game’s second notable feature. After selecting a Skydiver, you cross your fingers that he will be the one to accumulate the most modifiers. Free games, additional Stunt Double scatters, and Hearts and Stars are all possible outcomes. When you land on the parachute, the bonus spins start.

We can see a movie set in the background, with the director sitting on a chair and a camera team in the distance. We notice a lot of movie or stuntman-related photographs on the Stunt Stars reels. In addition to the dull Royal emblems, there are additional images that represent stuntpeople riding motorbikes, a stuntwoman firing pistols, boots, and movie reels, as well as a man falling out of an airplane.

The Stunt Stars demo can be lucrative, has a compelling plot and a functional layout, and I found its features to be entertaining. Overall, it’s a slot that’s interesting to play, but only if the RTP is 96%.