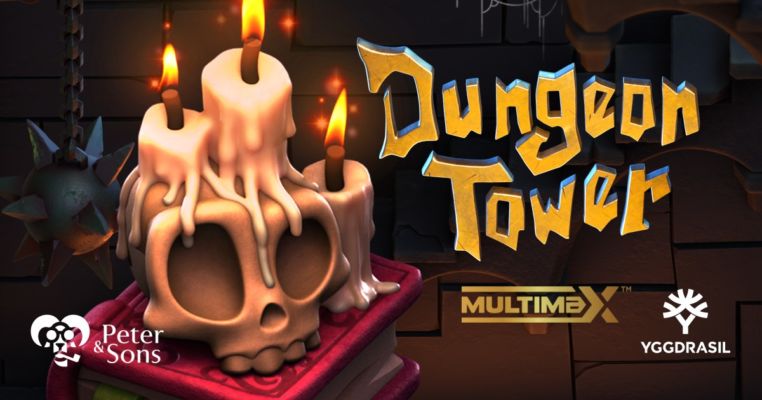 Peter & Sons has created a brand-new slot machine named Dungeon Tower MultiMax in partnership with Yggdrasil Gaming. It looks fantastic on numerous levels since it makes use of the MultiMax engine and has a pleasant fantasy-inspired design.

Dungeon Tower MultiMax has 5×5 reels and a Cluster Pays engine, which enables you to create combos by placing three or more identical symbols next to one another on a row or reel. With top payouts of up to 20,000x ($1,000,000 top jackpot) and significant volatility to match, it has the correct top payouts. RTP increases to 96%.

The wild, cascading reels, free spins, and the MultiMax function, which introduces multipliers to the gaming area, are a few noteworthy characteristics to highlight.

In Dungeon Tower MultiMax, a wager can be placed for as little as $0.20 and go up to $50 from there.

In Dungeon Tower MultiMax, the top reward can be as high as 20,000 times the round’s wager, which is a respectable payout. The game may provide prizes of up to $1,000,000. The slot machine is extremely volatile, with potential RTP values ranging up to 96%.

When three to five identical symbols appear in a row or column to establish a winning combination, cascading reels will then begin to spin. This mechanism will activate, eliminate any winning symbols, and then fill the empty spaces with up to three additional wild symbols.

There is nothing remarkable about using the game’s wild as a replacement. Though handy, it can also create its own combos and then pay as much as the top symbol.

This method increases the multiplier for the reel that receives a wild while also scattering wilds on the reels in a cascade. These multipliers, which are displayed at the top, each increase just winnings resulting from columns.

A win that develops horizontally is increased by each multiplier reel it passes through. At least during paid spins, the multiplier resets after the cascade is over.

If you have up to five scatter symbols anywhere in view, you will receive up to 11 free spins as part of the main feature. The multiplier reels don’t reset between rounds, which is the difference at this stage.

The slot machine has a dungeon motif and has lava rivers flowing next to the reels. You will find a variety of 3D symbols on the reels, such as spiders, rats, skeletons, and goblins as well as rocks with the Royals painted on them. Along with a Dungeon Key scatter, there is a spell book with a W on it (wild).

If you don’t mind its volatility, Dungeon Tower MultiMax should be a good choice for you because it offers the ideal balance of strong features, intricate graphics, and large jackpots.