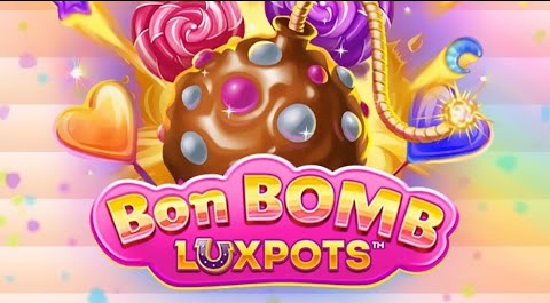 Lucksome, a Blueprint Gaming partner, has created something a little more wacky than we’re used to seeing from them. For the studio’s first Megaways-powered game, Bon Bomb Luxpots Megaways, the team has ditched the mythology and voodoo dolls in favour of something a lot fluffier. It’s a beautiful title, and it sounds like something Willy Wonka would name his most opulent candy bar. Sweeties, cascades, quick scatter rewards, multipliers, and free spins abound in this game, which lives up to its name.

The instant Bon Bomb Luxpots Megaways loads, players are showered with stats, including overall volatility of 7 out of 10, win focus, and max win, as per Lucksome’s custom. From there, we discover an RTP of 96.2 percent in ordinary mode and 96.22 percent while purchasing a bonus. The bet range isn’t large, but it’s guaranteed to suit most gamers, starting at 20 pence each spin and increasing to £/€40 every spin.

The paytable begins with five hard candies in the shapes of stars, moons, diamonds, squares, and circles. A line of six of these symbols pays out 1-1.5 times the original wager. Wrapped candies, gummy bears, doughnuts, and cakes are the premiums, with a six-of-a-kind victory paying 2-40x the stake.

When a winning combination appears, this classic Megaways feature removes it and replaces it with symbols that fall from the sky. If this results in another win, the process is continued until there are no more wins.

Bon Bomb Luxpots is a Megaways game with six primary reels containing two to seven symbols each and a four-cell horizontal tracker reel spinning side to side on top. The number of possibilities to win reaches a maximum of 117,648 on each spin, but it changes dynamically as different numbers of symbols land on the reels. Giant doughnuts, rainbows, and sweets surround the grid, which is set into the side of what appears to be an ice cream truck, while a Disney-esque soundtrack bubbles over the top of it all, like Nutella melting on a waffle. It isn’t as aesthetically extravagant as some of the other slots in this category, but it is extravagant enough to appeal to fans of this style.